​2SAN Global are a company owned by members of the Plymouth Brethren (Exclusive Brethren), including Dean Hales, son of sect leader Bruce Hales. Our exclusive report on how 2SAN Global have employed 10 of the Senior Management team from UK Government's Test & Trace department.
2SAN Global was incorporated May 26th 2020 (just 2 days before Sante Global LLP - who our regular readers will be very familiar with!). 2SAN have 3 directors, Simon Whiley, Daniel & Greg Calder. The PSC (major shareholder) is Dean Hales based in Sydney Australia. The registered address is in Oakwood Way, Carnforth. Accounts for 2SAN Global show that from from May 26th - Dec 31st 2020 they turned over £5.5 million. They have added 2 companies Craftex, an Ilchester, Yeovil based cleaning systems business and Sanera Medical Supplies, an Australian based medical supplies firm, to the group. Both Craftex & Sanera are ran by brethren members, with the Tallamy family running the former, and the Lee family the later. 2SAN state they are set up to supply PPE, Cleaning & Infection control systems across the globe. Their case studies show PPE supply contracts to governments in Denmark, Australia and the USA. In addition to supplying in the UK to various companies and establishments including, the Supreme Court, Mcdonalds, 02 arena, Kew Gardens and Puregym. 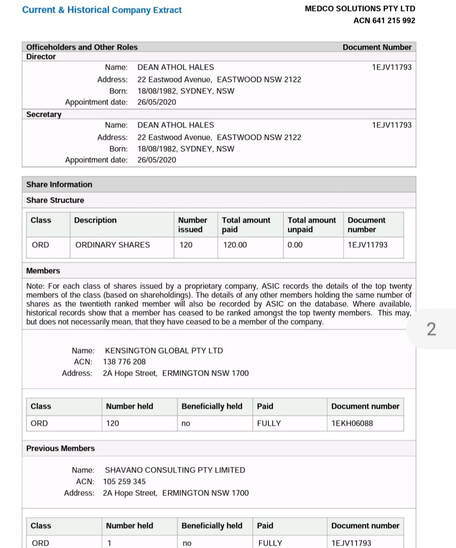 We also found that Medco Solutions director Ross Robertson was open about the collaboration with 2SAN Global. The comment below was made to Mark Hewlett, which brings us to the links to Test & Trace Senior team. 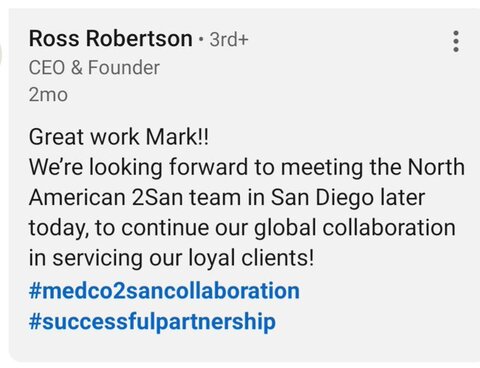 ​Mark Hewlett is now the CEO for 2SAN Global. Prior to joining 2SAN, he was Chief Operating Officer & member of the Test & Trace executive committee for the DHSC, laterly UKHSA. His salary at Test & Trace was highlighted by the Mail last year. 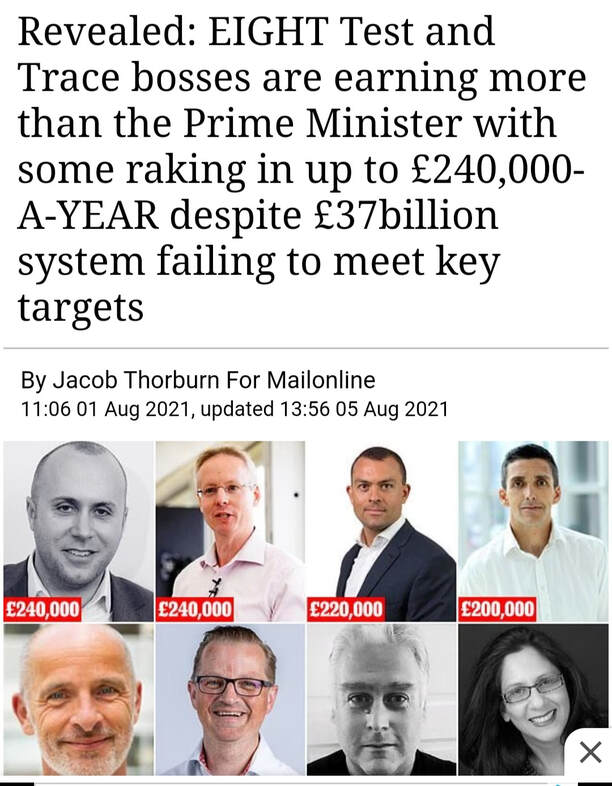 The connections don't end with Hewlett, we have found a further 9 employees from senior positions in Test & Trace have now joined 2SAN Global alongside Hewlett. These are the positions held within Test and Trace of the other 9 new 2SAN employees:
There is one new employee of 2SAN, formerly of the Test & Trace team, who we can not confirm their actual position at Test & Trace. We believe that the 10 new 2SAN employees would have been earning in total above £1 million per year from their government roles. 2SAN Global incorporated in May 2020, they reported turnover of £5.5 million in first 7 months (turnover not profit). This would mean the recruitment of the 10 ex Test & Trace employees would have been a very significant investment in people. Especially considering, that they have also brought 2 companies into the 2SAN group in the last 12 months. We have to ask where is the money coming from for this growth? Are Medco Solutions part of 2SAN global? We know through Ross Robertson that they are certainly working in collaboration/partnership. It would be interesting to see if there is to be an update to UK ownership of Medco Solutions.

Though it does seem an oddity for 10 senior Test & Trace team to join the Dean Hales owned 2SAN Global. We are certainly not suggesting any wrong doing of any kind.

Still the connections do not end there! Ross Robertson of Medco Solutions is a small shareholder in a Sante subsiduary and worked for Unispace until March 2020. Lee Hazell works for Medco & his brother is Anthony Hazell of Unispace/Sante. Lee Hazell is also named as a director of Meraki Global Investments, alongside Ross & Luke Robertson and Dean Hales.

Finally when Ross Robertson of Medco Solutions # tagged the partnership with 2SAN Global. He mentioned meeting in San Diego. San Diego is home of ACON the supplier of LFT. According to reports on a facebook group for Ex Brethren members, A private jet registered to sect leader Bruce Hales, has been in southern California this year.